Of all the natural predators that chickens have to deal with in the wild, there are few that are as determined as the raccoon. A raccoon’s clever nature and manual dexterity make them as much a threat to a coop as larger, stronger predators, and the fact that they carry diseases like rabies makes them as dangerous to humans as they are to chickens.

Ultimately, the best way to keep your chickens are safe from raccoons is to make sure that a raccoon cannot get into the coop. By predator-proofing your chickens’ coop, maintaining a clear, well-lit line of visibility, and keeping the area around the coop free of any potential hiding spots, you can keep these crafty carnivores from devastating your flock, and keep your chickens healthy and safe.

The coop itself is the strongest source of protection for your chickens, and if it’s strong enough, it should do most of the work in deterring predators like raccoons from preying on your flock. However, because raccoons are small and agile, there are more factors to take into consideration that could be exploited, including:

Raccoons may not have opposable thumbs, but they do have an unusually high number of sensory receptors in their “hands” (actually just extremely sensitive front paws), which allows them to perform extremely delicate actions like opening door or unhooking latches.

A simple latch may be enough to deter larger and stronger predators, but what raccoons lack in size, they more than make up for in intelligence and manual dexterity.

Make sure any latches or doors on your coop are securely fastened with twine or even secured with padlocks, so that a raccoon can’t simply open up the coop and help himself to whatever he finds inside.

On a similar note, any weak spot in the coop’s walls or surroundings can easily be exploited by a raccoon. Again, because raccoons have an above average level of manual dexterity, and because they are relentless predators, they have often been observed to tear away at any chink in a coop’s defenses until it is large enough to slip through before making their way inside and feasting on the defenseless chickens and their eggs.

Check your coop regularly for any holes or gaps, both inside and out, that a raccoon could use to gain entry. Once you’ve identified a weak spot, you can plug the gap with steel wool, or plaster over it with more wood, or even put a metal mesh cover over the hole until you can fully repair it. As long as the gap is closed or made small enough that a raccoon can’t get even a single “finger” through to the inside of the coop, your chickens should be safe.

Raccoons also have a highly developed sense of smell, which can lead them directly to your chicken coop, but can also provide a way of warding them off. The smell of ammonia or bleach is highly repulsive to raccoons, and can be purchased at any home supply store and spread around the coop in order to frighten raccoons away.

Similarly, many pet supply stores or online retailers offer predator urine for purchase. While it may be a little less hygienic than ammonia, spraying predator urine (typically collected from animals like dogs, coyotes, large cats like panthers and cougars, or wolves) around your coop is an almost surefire way to make raccoons thinks twice about coming closer.

However, because chickens are prey animals, this does run the risk of making them uneasy in their coop, too, so ammonia may still be the safest choice when dealing with skittish animals like chickens.

Another thing to consider when dealing with predators like raccoons–or, in many cases, rodents like rats and opossums–is that they can climb. This alone is enough to open up many new access routes for raccoons that may not be available for traditional predators like dogs or coyotes, and you have to plan accordingly when making sure your chicken coop is safe.

To make sure that your chicken coop is reinforced from above, make sure that the roof meets the walls at every angle, and that there is no gap at the corners or on the straight edges where a raccoon might be able to get a hold. If there are any openings in your roof, make sure they are covered with a small-gap mesh or some other material that will make it impossible for a raccoon to sneak through.

Basically, the goal is to make sure that your coop is secure from every possible angle.

While chicken wire may seem like the perfect solution for filling in gaps in your chicken coop–it’s right there in the name, after all!–it’s sadly not enough to deter a hungry raccoon. Chicken wire does well against chickens themselves and larger predators who will be stopped by the presence of a fence, but a raccoon can reach its hands through and tear at the opening until it’s large enough to slip through.

Instead, try using small-mesh fencing material. Galvanized hardware cloth is available at most home improvement supply stores, and the welded edge of the wires will make it far more difficult for raccoons to gain access. Steel wool should be used instead of chicken wire to fill in gaps in your coop, but for lengths of fencing, you should be using something like hardware cloth fencing, so that raccoons can’t sneak their hands through the links and break into the coop. 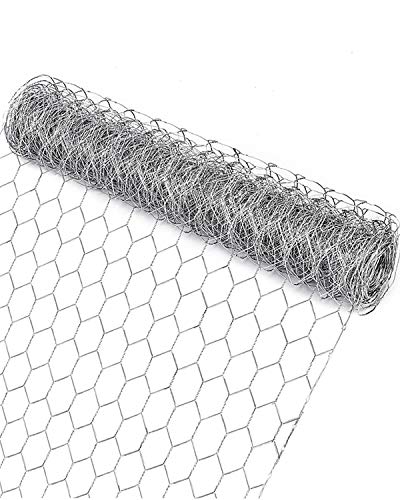 As mentioned in the entry regarding roofs, a raccoon’s physical build makes it able to take advantage of unorthodox routes, and one of those routes is directly beneath your chickens’ feet. If your coop is not adequately proofed against raccoons, they may tunnel underneath the walls of the coop and enter through this new opening.

To proof against any dedicated diggers, make sure the walls of your coop extend at least a foot below the surface of the earth. This doesn’t mean that you have to have wood planks two feet deep into the ground. Instead, you can use hardware mesh fencing to make up the extra distance, or use another material that’s easier to handle. No matter what material you settle on, if it’s enough to stop a raccoon from tunneling into the safety of your coop, it should be more than enough to keep your coop and your chickens safe and sound.

7. Keep a Line of Sight Open

Raccoons may be clever, but they are still wild animals, and, like most wild animals, can be easily startled or frightened away by the presence of a human guard for the chicken coop. For this reason, it’s very important that your chicken coop is easily visible from your house, so that you can respond to threats quickly and effectively.

Another good way to frighten away potential predators is to install a lighting system around the coop. So long as you make sure the inside of the coop is sealed against light so that your chickens can get a good night’s sleep, a blinding light can startle predators like raccoons into beating a hasty retreat. Areas, where raccoons are prevalent, will often offer light systems specifically to deter raccoons–motion activated alarm systems that will switch on a blinding light that should be enough to send the would-be coop-raider scurrying back for the safety of the darkness.

Finally, you may want to make sure that there are no large bushes or trees between your house and the chicken coop. This will make sure that your line of sight remains clear, but will also prevent raccoons from being able to hide during the day or access the coop from a different angle at night.

In addition to keeping the area between the coop and the house free of any large plants where raccoons can sleep and hide away, there are various measures you can take to make your yard as a whole less appealing to raccoons, including:

1. Setting Down a Scent

As mentioned above, scents like ammonia or the proteins found in predator urine are extremely repulsive to raccoons. However, if you want to spray your entire yard, it may be best to search for a natural pest repellent that you can use without frightening your chickens or any other pets you have at home.

In addition, to make sure that your yard is safe from any predators that might be passing through the neighborhood, try to get rid of anything that would attract a raccoon to your yard in the first place. This can include pet food or even chicken food, which raccoons can smell from a great distance, and can actually invite them to consider your yard as a potential food source for up to three years later.

2. Getting Rid of Garbage

Similar to the above entry, this is less about protecting your chickens in their coop and more about protecting them by making sure raccoons have no reason to be hanging around your house to begin with.

Raccoons are naturally carnivorous, but they love to forage through garbage cans for anything tasty that homeowners have left behind. Especially as raccoons adapt to human habitation, an unsecured trash can serves as a welcome mat for a hungry raccoon, and so they will be far more likely to return to your yard and check for any other easily available sources of food. Make sure any garbage that you put outside is fully sealed and taken away regularly so that nothing is left behind to tempt a hungry raccoon.

If your coop is reinforced to protect against a tunneling raccoon, you may want to make sure your fence is reinforced the same way. Obviously a fence around the backyard is a much larger undertaking than the walls of a chicken coop, but if possible, extending the foundation of your fence can go a long way towards making your yard safer for your chickens and any other animals you keep at home.

If extending the foundation is impractical, then make sure any obvious gaps are patched up, using the same tools you used to predator-proof your chicken coop in order to block out the raccoons as much as possible.

4. Putting Your Pooch to Work

However, raccoons have been known to attack dogs if cornered, so unless your dog is properly trained, try to avoid letting him chase after raccoons. 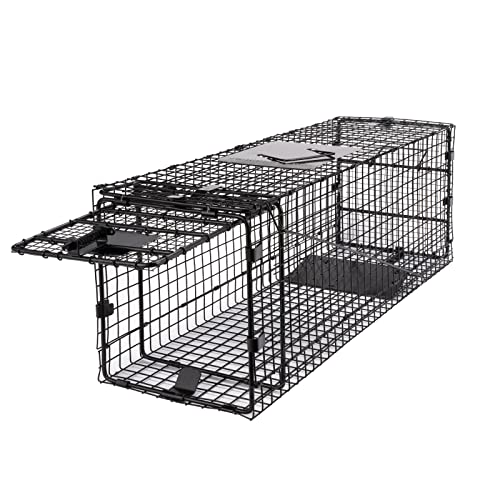 One extra thing to take note of is the natural sleep cycle of raccoons. Raccoons are primarily nocturnal, but, as they adapt more and more to human presence in their habitats, they are starting to hunt more during the day. Keep an eye out for raccoons as you would for any other predators, but also keep in mind that they are the most common carriers of rabies in North America.

If you see a raccoon during the day, it could be harmless or it could be diseased, so if you approach it at all, do so with extreme caution. If you have reason to suspect that a raccoon might be rabid, your first priority should be to get yourself, your family, and your animals out of harm’s way before you go to deal with the raccoon.