Brahma chickens are the Kings of Poultry because of their enormous size and strength. Some of these birds have reached upwards of 18 pounds in weight so we’re not joking when we say they’re big! The only chicken breed that’s larger is the Jersey Giant, but nothing says Chicken royalty like a Brahma chicken does.

Characteristics of the Brahma Chicken

Origins of the Brahma Chicken

Unfortunately, the origins of the Brahma chicken are mired in controversy. It’s widely believed that the breed was engineered in America using large fowls that were imported from China and India, but there’s no way to know with certainty.

Here’s what we do know:

Brahmas have been recognized since the beginning of their known existence for their unusual size. They are big chickens. What is even more shocking is that they make amazing egg layers. In fact, Brahmas are one of the best winter-laying chickens in the world. They lay most of their eggs during the winter months. Of course, these eggs are quite large and always brown.

Brahma hens will become more broody during the summer, spending much more time on their nests. The main problem of these birds is the grave threat that they trample their young. Due to their large size, Brahma chicks must be protected from the footfalls of their parents.

Back in the mid-19th century, Brahmas were one of the most profitable chicken breeds on the market. They were raised for between 8 and 10 weeks due to their size and sold for a hefty profit.

Brahmas are also easy to keep contained due to their inability to fly well. This should come as no surprise due to their size. But what is shocking is their docile temperament. For such a large bird, they are peaceful and calm. This breed is also one of the most preferred for colder climates since they are highly adaptable to cold weather. As a result, they are not going to thrive in warmer climates.

As I mentioned earlier, there are three types of feather patterns that adorn Brahmas. These are very distinct so there should be no confusion here.

Light Brahmas contrast black and white quite nicely. They have a grayish undertone that stands out with their black stripping. Their tail is completely black with some of the covert feathers standing out as white.

Dark Brahmas will have silver hackles along with a black stripe along the saddle area. Their shoulders are a solid silver color and their tails, body, and breasts are black.

Hens will have feathers that are black with light grey. These patterns will be laced in a white the offsets the colors. Medium gray is the primary feature of the body, breasts, and wings.

This pattern is pretty much exactly the same as the light feather pattern but the light colors are replaced with buff. Due to the brighter color, this one is the most popular.

While there are other colors that exist, they are found few and far between because of their lack of popularity.

The Brahma Has Unique Character Traits

Brahmas are large birds that look quite intimidating, but they are a docile bird, even when being handled. Since they are so large, these birds cannot fly very well, so they are easy to confine.

While these birds don’t mind being confined, it’s vital that they are given enough space to forage.

Of course, their large size makes them an excellent choice for those folks living in colder climates.

This breed also prefers soil that is dry with a moist, colder climate. That means muddy areas will need to be avoided since it can lead to issues with their feet and makes Brahmas unhappy.

Brahmas also make amazing brooders and tend to sit on their nests quite well, but they are not as broody as other breeds.

As you might expect, these birds are high in the pecking order since most hens are intimidated by them. But they do not usually bully other flocks and tend to get along with other chickens.

Why Should You Raise Brahmas?

Brahmas were bred exclusively for meat centuries ago since one bird could feed an entire family. Now we also know that they can also be used as decent egg layers. What makes them so amazing is that they will lay eggs during the winter, when other breeds stop laying eggs. So by mixing a few Brahmas in with other breeds, you are going to get eggs all year long.

Furthermore, their eggs are brown and big. The only downside is that it takes them up to 7 months to start laying eggs.

Health Issues That Are Found in the Brahma

The first issue actually happens with all birds that have feathers on their feet. This can become a big issue in winter since these feathers collect water and mud. That moisture exposes them to frostbite, which can severely damage their feet. You must pay close attention to their feet when you allow them to roam about.

Also, you will have to keep a close watch for lice and mites since Brahmas have such dense feathering. Inspect them frequently for those scaly leg mites too since it’s difficult to spot due to their feathered feet.

A foot quill will sometimes get caught in something and break-off, leading to other issues if not treated. It will bleed but you can apply pressure and use corn starch to address the wound.

Are Brahma Chickens a Good Choice for You?

If you are a fan of big chickens, then this would make a perfect choice. They are an amazing family-friendly chicken that will make a great asset to your flock.

Small children might be a little scared of them early on, but they will quickly grow out of it. Brahmas have such a calm demeanor, so you’ll quickly grow to love them. But keep in mind that there are a lot of special considerations that will need to be made. For instance, Brahmas will need sturdy roosts that can hold up their weight. They will also need larger nests and wider doorways.

Brahmas also take much longer to mature. Sometimes, they will not fully mature for two full years but that is quite rare. It usually happens within 7 months. Chicks hatch quickly and become strong much faster than other chicks. Plus they will start developing feathers rapidly.

This breed of chicken is inexpensive to buy from both hatcheries and dedicated breeders. Sexed chicks are slightly more expensive, but the cost gap is nowhere near as big as it is with other breeds.

If you live in a warm climate, then you should not raise Brahmas since they handle warm weather quite poorly. They are definitely a cold climate breed of chicken.

They Need the Right Housing

If you decide that you want to give Brahma’s a try, then you’ll need the right housing to make sure they can flourish. This is generally the same as smaller breeds. The main difference is the fact that you will need to accommodate their size.

Brahma Chickens held the title “King of Chickens” for a long time until the Jersy Giant came onto the scene.

In order to decide whether this bird is the right choice for you, make a list of factors that make it different from standard chickens. 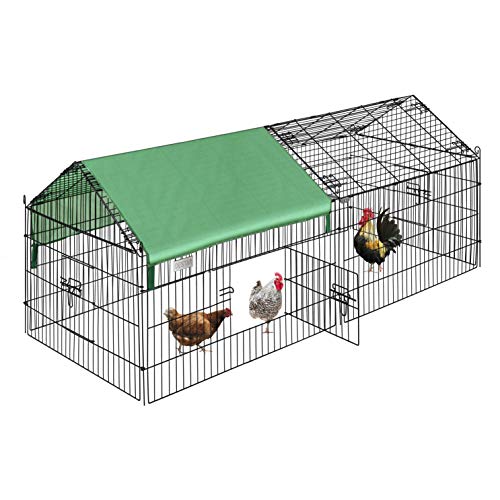 With that said, you will not be disappointed in these birds. They are an amazing addition to any flock. Their friendly nature and size will make them protectors of your flock as they may intimidate some smaller predators.